The seventh issue of ‘The World of Dogues de Bordeaux’, the tri-annual which covers the worldwide interest in the breed during the years 2017, 2018 and 2019, will be published coming Winter. Prominent breed fanciers, from Canada to Australia and from Finland to South Africa, will bring you the highlights of regional love for the Dogue. In an increasingly faster and smaller world, ‘The World of Dogues de Bordeaux’ is a colourful reference, essential for true fanciers of the breed.

Smaller
The international orientation of breeders and judges alike has given the development of the breed an extra input. Going for the best is what counts more than ever, helped by modern technology. With ‘The World of Dogues de Bordeaux’ as the most comprehensive guide.

Faster
Internet has given love for the Dogue a dimension, which until a few years ago, was unthinkable. The very same day a dog show is held, the results can be seen at home. Including the latest gossip. Hundreds of messages per e-group, per week, are not unusual.

The more there is to surf, the more there is the need for a quiet moment of study and unbiased reference. And for the preservation what is easily forgotten, see ‘The World of Dogues de Bordeaux’.

Colourful
‘The World of Dogues de Bordeaux’ brings you all the aspects which makes it such a colourful reference. Facts, figures and photographs about events of the breed clubs, of champions and other important dogs. So in principle every champion will be honoured by a full colour photograph and a three-generation pedigree, for free. But also indepth articles about subjects such as breeding, type, history, standard, art, law, health as well as extensive interviews with first rank breed fanciers. All this will be covered in 300 pages. 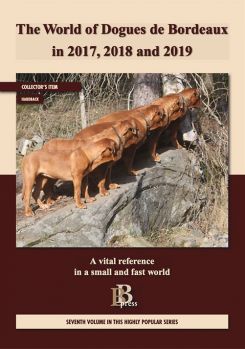