This is the second issue of ‘The World of Mastiffs in the New Millennium’, the annual which will cover the growing worldwide interest and passion for the breed during the years, 2016, 2017, 2018, 2019 and 2020. The first annual, covering 2000-2015 was that well received that we had to decide – with all possible pleasure – to go for a shorter time-span. The second annual will be published this coming Winter 2021. Bringing together a wealth of talent via prominent breed fanciers, from the four corners of the world in order to embrace and document the highlights of breed activity in their country, it also combines a regional love for the Mastiff. In an increasingly faster and smaller world, ‘The World of Mastiffs’ is a colourful reference book as well as essential reading and owning for true fanciers of the breed.

Smaller
The international collaboration of breeders/ exhibitors and judges alike has given this publication a valuable insight into the development of the breedall over the world. Going for the best is what counts more than ever, aided and abetted by the very best in modern technology, this publication, ‘The World of Mastiffs’ is the most comprehensive guide to the breed worldwide.

Faster
The advent of the Internet has given lovers of the Mastiff an extra dimension, which until a few years ago, was unthinkable; since the same day a dog show is held the results can be screened into our homes in an instant – the same however can be said of gossip in the breed. Hundreds of messages per e-group, per week are certainly not unusual; the more there is to surf, the more there is the need for a quiet moment of study and unbiased reference. So, for the preservation what is easily forgotten, see ‘The World of Mastiffs’. 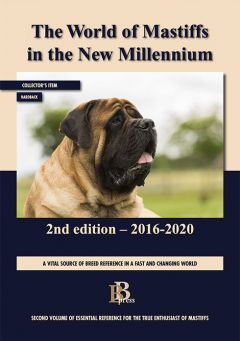 Title:
The World of Mastiffs, In the New Millennium